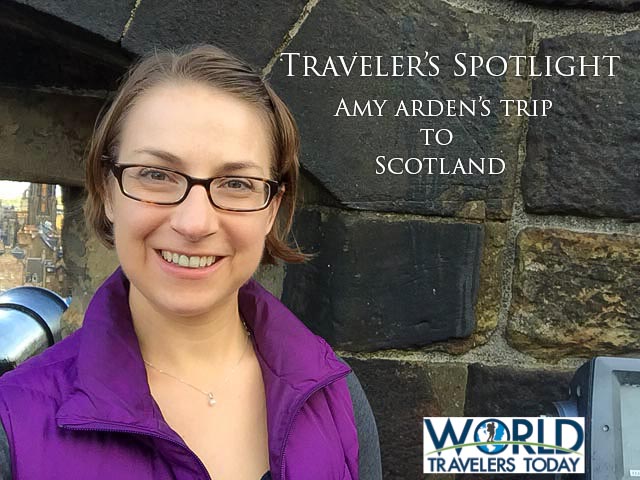 After my visit to Edinburgh I discovered that J.K. Rowling and I have something in common – we’ve both haunted its coffee shops with our laptops, pounding out our stories, hoping to nurture tiny creative sparks into something that could be called art.

Edinburgh is known as the “City of Festivals,” and it frequently plays host, most famously for the Fringe each August. There’s also its celebrated landmarks, like Edinburgh Castle, home to a colossal 15th-century cannon known as Mons Meg, and the Palace of Holyroodhouse, once the residence of the doomed Mary Queen of Scots and now the site of annual garden parties hosted by British royals. Among Edinburgh’s Gothic spires and modern flats, tradition and creativity not only coexist, they swirl together in a captivating mix that draws tourists, artists, and voyeurs alike. What else would you expect from the first city named as a UNESCO City of Literature? As a result, it’s a great city for writers – and anyone else who likes to go exploring.

When I began working on a novel based on the life of the intrepid Lady Katherine “Kate” Cochrane and discovered that some of her correspondence still survived in Scottish archives, I found all the excuse I needed to head to Scotland. As the native of a small Pennsylvania town called Edinboro, namesake of the original, I’d grown up with bagpipes and Braveheart, and was eager to see how my childhood assumptions stood against genuine experience.

“Inside the castle, you can view a 12th-century chapel, visit the National War Museum of Scotland, and see the Honours of Scotland.”

Tourists flock to this pedestrian-friendly street that stretches from Edinburgh Castle to the Palace of Holyroodhouse. Not only does it connect two of the city’s most visited attractions, it’s also chock-full of restaurants, pubs, and shops. You can take it a good bit of history just by walking around – you’ll pass Tron Kirk, dating back to the 1630s when a local parish lost their church following a decree by King Charles I and, in a fit of religious pique, built this one instead (it’s now a visitor center rather than a church), and Deacon Brodie’s pub. The pub is named for William Brodie, whose double life of both good and evil is said to be the inspiration for Robert Louis Stevenson’s Dr. Jekyll and Mr. Hyde. Outside of Paris, the Royal Mile may be one of the best places to play flaneur and simply engage in people-watching.

The castle casts an imposing shadow over Edinburgh’s Old Town, and the structure itself is intimately connected with Scottish history. Inside the castle, you can view a 12th-century chapel, visit the National War Museum of Scotland, and see the Honours of Scotland. The crown jewels have had a tumultuous history of being smuggled, hidden, and rediscovered over the centuries, and I found their story – truly a case of the truth being stranger than fiction – one of the most fascinating aspects of my visit.

There is also a tiny cemetery on the grounds where pets who served as regimental mascots are buried, a touching nod to the animals who have taken part in history’s conflicts.

This small museum in a courtyard off The Royal Mile hosts displays on Robert Burns, Sir Walter Scott, and Robert Louis Stevenson. Here the literary legacies of these writers are given their due, along with humanizing touches: Scott’s childhood bout with polio that left him lame for life, Burns’ tumultuous love affairs, Stevenson’s real-life fascination with tropical islands that prompted voyages to Hawaii, Tahiti, and beyond. Admission is free.

Arthur’s Seat offers a taste of the wilderness in the heart of the city. Ramble over its winding paths and craggy bluffs to enjoy superb views over Edinburgh and catch glimpses of the sea. I climbed here very early one morning and had the place nearly to myself – much of the path was still in shadow, every new turn brought a new view over the city, and the sound of birds crying overhead and the damp grasses underneath made it easy to imagine I’d stepped back into another century. As I climbed, the sun rose with me, and I reached the summit under bright blue skies and a feeling of pure exhilaration. Be sure to take sturdy footwear and be prepared for steep ascents and descents. If you’re planning on an extended hike, bring a snack!

A short train ride from Edinburgh, the town of Dunfermline is home to Dunfermline Abbey, the resting place of King Robert the Bruce. The church itself has a fascinating – and long – history! And in case there’s any doubt about the church’s connection to Scotland’s most famous monarch, a glance at the name carved into the top of the abbey’s tower makes it plain.

Heading further into Fife, I took a local bus from Dunfermline into Culross. This tiny village perched on the Firth of Forth dates back to the 16th century. It too has an abbey – partly in ruins – and like any good Jane Austen heroine would do, I made a beeline for it as soon as I stepped off the bus.

Photo by Amy Arden – Culross Firth of Forth.

Here too I could explore at will, alone, snapping photos as quick as my smartphone could take them, and wandering among the ruins. A metal ladder led to a second story, and standing under those ancient stones again allowed past and present to collapse.

Nearly next door to Culross Abbey is Culross Abbey House, boyhood home of Admiral Thomas Cochrane, husband to my heroine Kate. The house has stood for over four centuries on the high ground overlooking the Forth. It is a fitting place for a boy who loved the sea to grow up; Thomas returned later in life with Kate hoping to buy the place back after his father had sold it off to settle the family’s debts. On the afternoon I visited, sheep grazed in the adjacent meadows, sun split between the gray clouds and fell sparkling onto the windows and the waters of the Firth, and I could only wonder at who now called it home.

“I tried the daily special of trout with steamed seasonal vegetables – hello, fancy! – served up with a pint and found both food and drink delicious.”

There is far more to Scottish cuisine than haggis, Scotch eggs, and ale.

Feeling luxurious or literary? Try afternoon tea at the upscale Balmoral Hotel. J. K. Rowling stayed here and famously finished Harry Potter and the Deathly Hallows. If you are feeling posh, you can book a stay in the “Rowling Suite.”

The diminutive and popular Jolly Judge Pub offers friendly service, a wide selection of ciders, ales, and beer, and a cozy nook to escape the crowds. Seats fill quickly.

If you are craving the tastes of Asia, Ting Thai Caravan has reasonably-priced rice and noodle dishes served at communal tables. My order of pad Thai with chicken was pleasantly spicy with a complex mix of flavors. It’s location near the University of Edinburgh campus means that hours are student-friendly (it’s open ‘til 10pm). Beer and wine are available. NOTE: Cash only.

In Culross, the Red Lion Inn is a charming pub within a few minutes’ walk of the town center. The menu includes many traditional favorites, like a ploughman’s lunch or Cumberland sausages, but the offerings are wider than most pubs. I tried the daily special of trout with steamed seasonal vegetables – hello, fancy! – served up with a pint and found both food and drink delicious. Also in Culross, the Biscuit Café serves soups, light fare, tea, coffee, and pastries. I ended my visit to Culross with a very restorative cream tea at this delightful café. There’s also a small patio where guests can sit when the weather allows.

After you’ve bought your kilt and CD of pipe music, what else should you bring home? A spurtle, a wooden spoon traditionally used for stirring porridge, makes a fun and easy-to-transport souvenir. If porridge isn’t your thing, your spurtle could be just as easily used for oatmeal, soups, smoothies, etc.

For something with a literal flavor of Scotland, skip the shortbread and try the Edinburgh Gin Raspberry Liqueur. Made from Perthshire raspberries, it has a lovely and authentic raspberry flavor that is neither too cloying nor too fake. I mixed mine with a bit of tonic water for a refreshing version of the classic gin n’ tonic.

In short, visiting Scotland was like stepping into a cross-century game of six degrees of separation. Each person and place had connections to the others: Robert Burns had visited Dunfermline Abbey, Sir Walter Scott played a hand in recovering the lost Honours of Scotland, Kate Cochrane toured Edinburgh and attracted the attention of Scott during a night at the theater (Scott dashed off a poem in admiration). I followed along after them, walking in invisible footsteps that led us to each other.